Welcome back to Let’s Play.  We last left our hero as he beamed from his ship, the U.S.S. Innovation, over to the U.S.S. Khitomer to see how he could be of help.  What will he see when he beams in?  Will he ever be given a security detail?  Will he be forever stuck with his handheld phaser?  And most importantly, will he ever fix the food replicator in his quarters?

I beam into the sick bay of the U.S.S. Khitomer, not quite sure what I’ll see.  Turns out that, despite the Borg invasion, sick bay is doing pretty well. 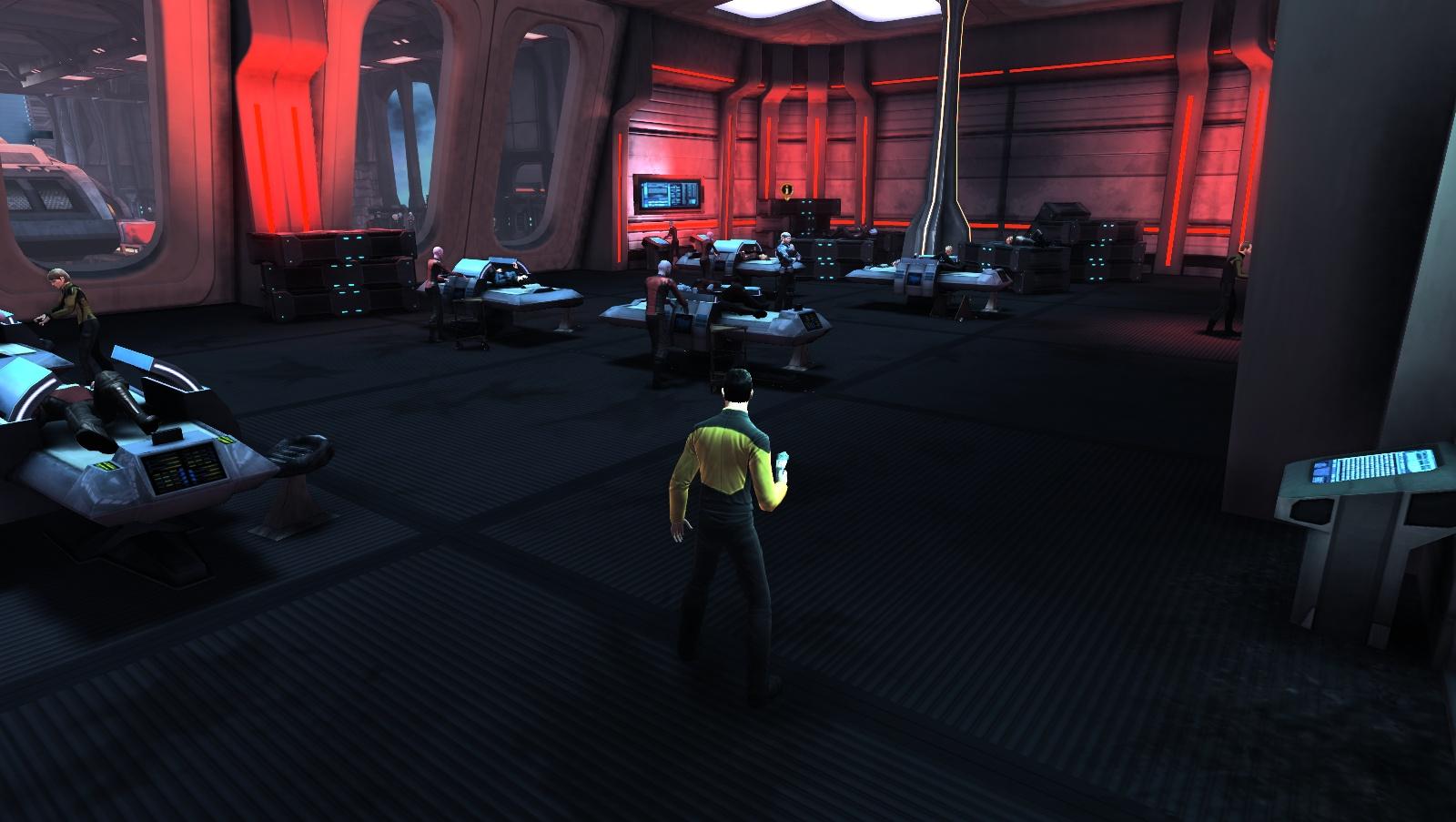 There aren’t even any explosions or anything, though there are cargo containers stacked haphazardly on either end of the room for some reason.

Out the windows, I can see some crewmen fighting off Borg invaders in the shuttle bay. 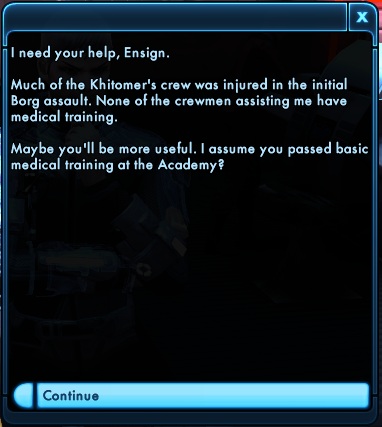 Eventually I realize I’m supposed to be doing something useful.  I look around the room to see who might need help.  The EMH is standing over there, flickering as if his emitters are damaged.  When he sees me looking at him, he waves me over to him.

“Ensign!  I need your help here in sick bay.  I have no medical staff.  I assume you passed basic medical training at the Academy?”  I nod that I had.  “Good.  Go over and scan that injured man with your tricorder.”  He points at a man lying uncomfortably on a cargo container.

I’m about to comply when I realize that my job is fixing machines — like holo- emitters.  “EMH,” I say, “I’m an engineer.  Wouldn’t it better if I repair your emitters, so you can take care of these people yourself?  They probably just need to be realigned, it’ll only take -”

The EMH cuts me off.  “Ensign, I really need you to check on that man over there.”

I swallow the rest of my sentence, then walk over to the injured man.  He looks up at me briefly, then closes his eyes again and groans.  I pull out my tricorder and scan him.  Internal bleeding, a few broken ribs, a ruptured kidney… he could probably use a real doctor about now.  I walk back to the EMH and relay my findings.

“Thanks!  I’ll take it from here.  Now I need you to go across the hall and help Lieutenant Thalis repair the auxiliary computer.”  He points at the door across from the shuttle bay windows.  “I’ll be available over the com-link if you need anything.”

I raise an eyebrow at him.  “You can’t even move.  Are you sure you don’t want me to repair your emitters?”  He doesn’t respond.  Ah well; at least I’ll be able to put my engineering expertise to use in Auxiliary Control.

I give the injured crewmen a sympathetic look, then walk out in uncomfortable silence.  Fortunately, I don’t have to walk far; Auxiliary Control is literally across the hall from sick bay.  Down the corridors are crewmen fighting Borg invaders, but someone has thoughtfully put up force fields keeping the Borg – and the crewmen fighting them – out of sick bay.  I hope none of those crewmen need medical assistance. 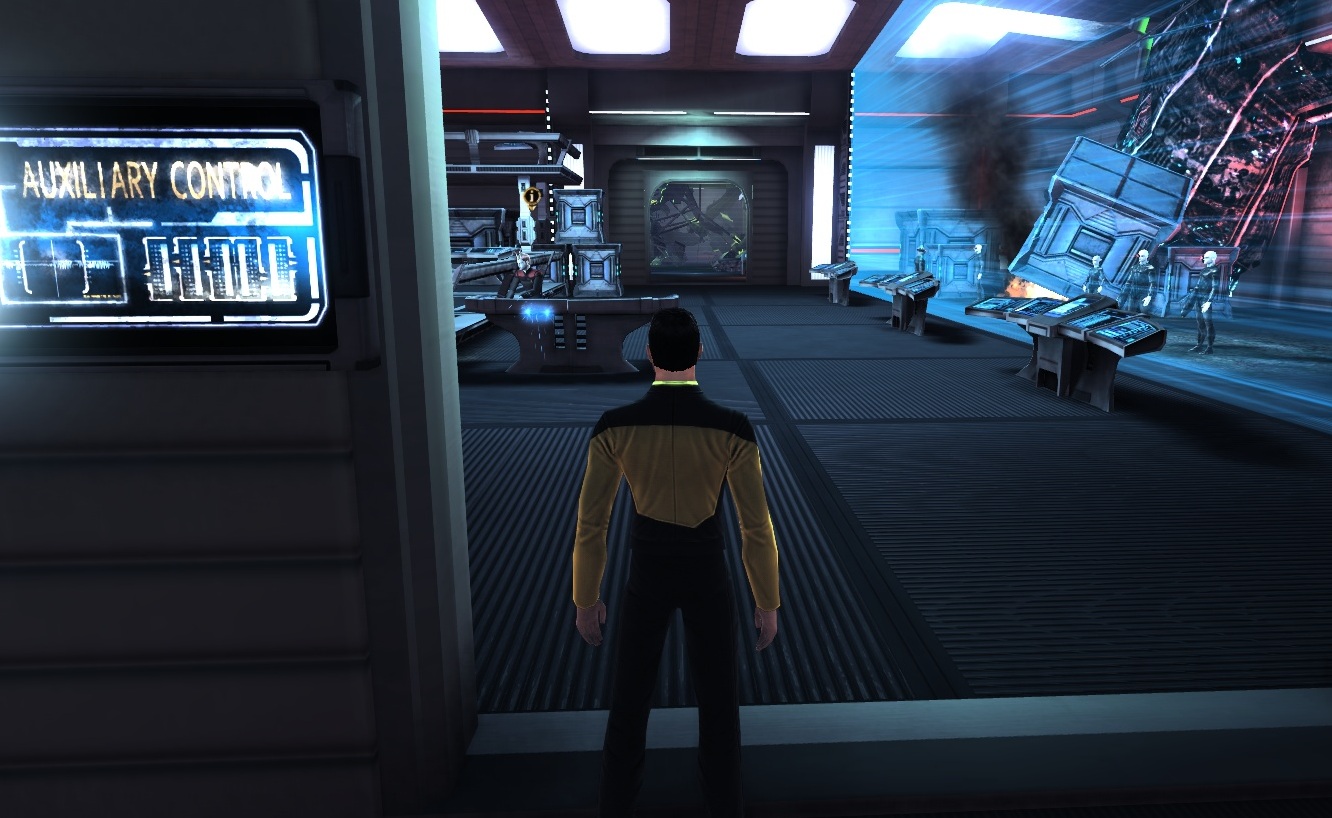 Inside the room, Lieutenant Thelis is frantically pounding at the controls as if the ship’s safety lies in his ability to type quickly.  Looking at the hull breach behind a force field out the opposite door, I realize that might not be too far from the truth.  I walk over and ask how I can help.

“Ah, Ensign, I’m glad you’re here.  I’ve got the computer repairs under control, but do you see those Borg drones behind that force field?”  I nod, eyeing them warily.  They could figure out how to get through the force field any minute.  “I want you to beam them out into space so I can concentrate on these repairs.” 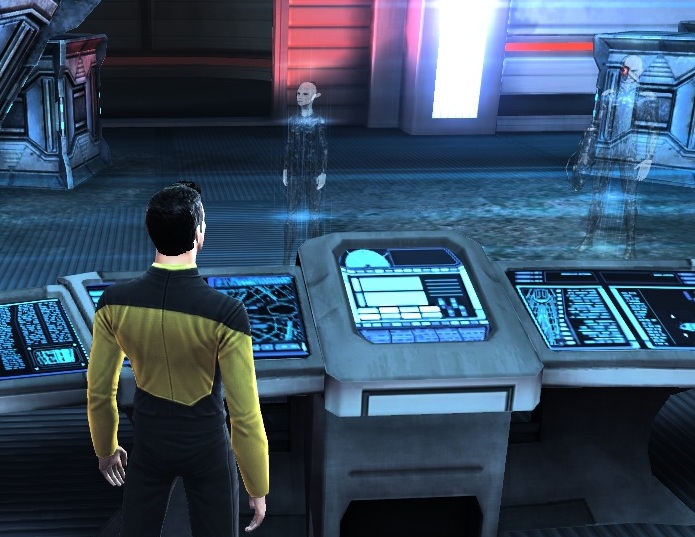 A grin breaks out onto my face.  At Starfleet Academy they told me it was an absurd idea to use the transporter as a weapon — and here I am saving the day doing exactly that!  I hum a little tune as I enter coordinates into the transporter’s targeting sensors, then watch the Borg drones fly out into space through a hull breach. 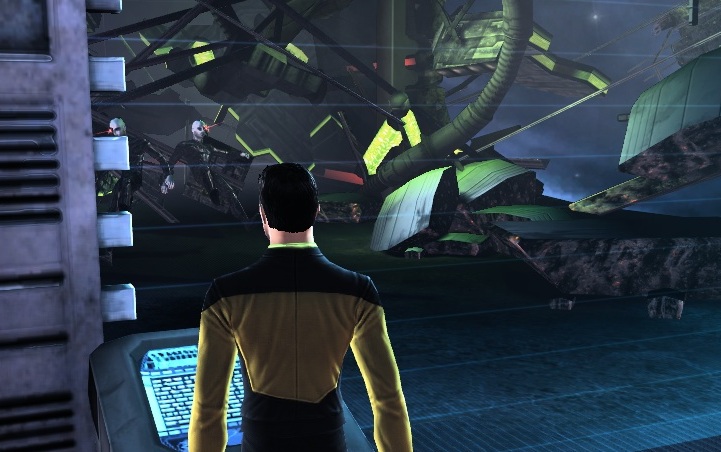 Lieutenant Thelis seems absorbed in whatever he’s doing on his console when I go back to him.  I offer to help him with the repairs — I am an engineer, after all — but he declines.  “But hey,” he says, “if you want to be useful, I think Commander Davis needs some help.”

I tap my combadge and contact Commander Davis.  “Yes, Ensign, I’ve got my hands full down here in Main Engineering, so I can definitely use your help.  The Borg have set up some devices on Deck 2 that are blocking our internal sensors and most of our communications.  I need you to go down there and destroy them.  Can you handle that?”

I grimace.  I really wish I had that security detail.  Going into Borg-controlled areas of the ship alone doesn’t sound very safe.  I take a deep breath, locate the turbolift, and head down a deck. 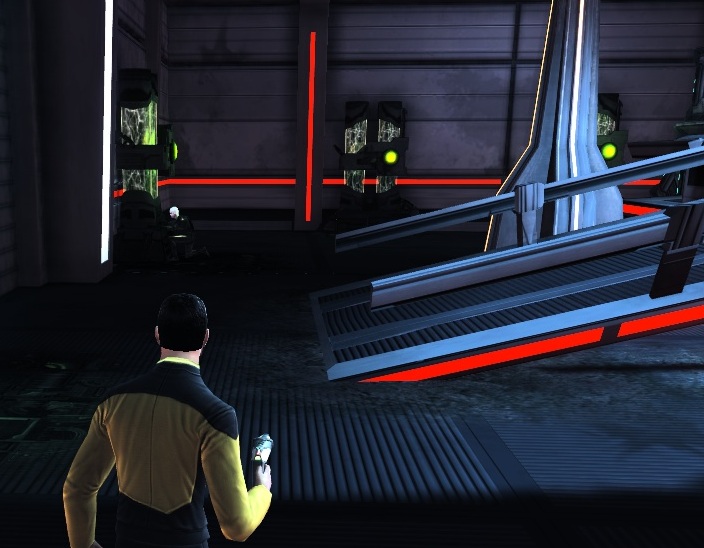 On Deck 2, I find that the Borg have appropriated a hallway and two adjoining rooms for their own use.  There aren’t many drones, though, so that’s a good sign.  Taking aim at one of the devices being set up by a drone, I cross my fingers that I didn’t screw up the wiring, and fire. 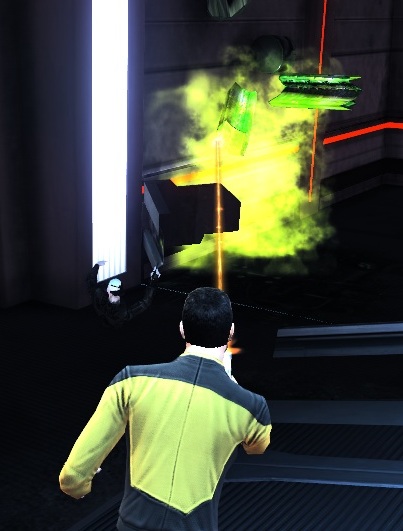 Much to my surprise, the Borg have built their devices using something highly explosive.  The drone standing in front of it is thrown several yards, and another quick phaser blast vaporizes it.

Taking heart from my successful phaser modifications, I proceed to blow up several other Borg devices.  I’m somewhat surprised — albeit pleasantly — that only one other drone shows up to defend their machinery.

Eventually I run out of explosive things to blow up, and I contact Commander Davis.  “Good, Ensign,” he says, “it looks like internal sensors are back online.  Are you up for helping me out some more?”

I get the feeling that’s a rhetorical question, so I don’t answer.  Sure enough, he doesn’t pause long enough for me to give one.

“Well, weapons and shields are down, and life support is on emergency power.  The bridge isn’t responding, so it’s up to us to get the ship operational again.  Think you can handle it?”

“I’m an engineer, sir,” I reply, “and I would love to help get your ship back in working order.”  I’m actually serious, too… it sure beats shooting Borg.

“Good,” he replies.  “Come down to Deck 3.  There may be some Borg in the halls, but make your way to Main Engineering as quickly as you can.”

I take the turbolift down another deck.  Sure enough, there are a few Borg drones milling about in the halls, apparently doing… nothing.  They aren’t even trying to access computer terminals or anything.  I’m beginning to wonder if they’re even active when they shoot at me.

With my trusty phaser, I take out the drones as I make my way down the corridor, and eventually arrive at Main Engineering, where some crewmen have set up a defense barricade, including a pair of phaser turrets.  There aren’t any Borg in sight. 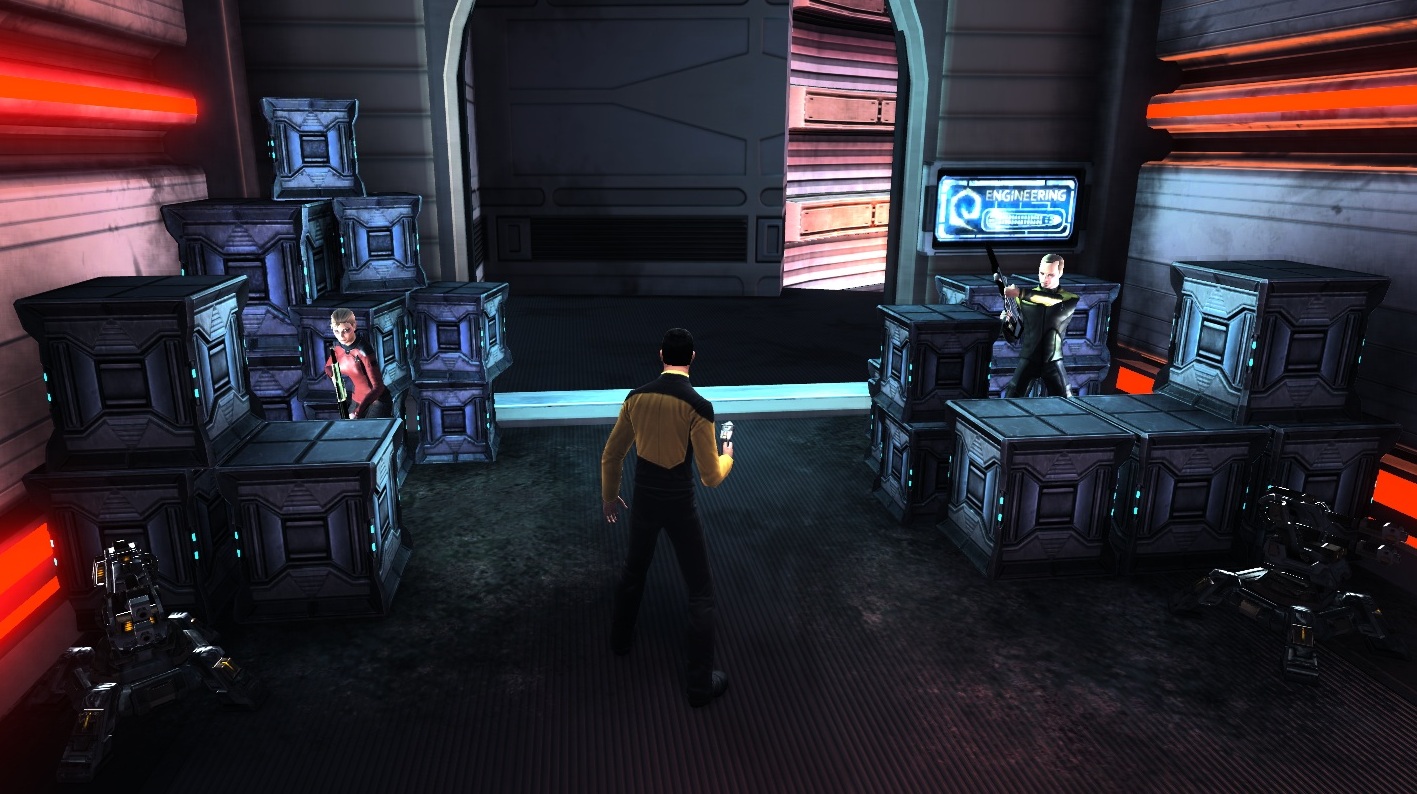 I walk past the barricade into engineering.  Commander Davis shouts at me.  “Ah, Ensign!  We’ve got Borg beaming in here.”  Just then several Borg drones beam in.  “Help us!” 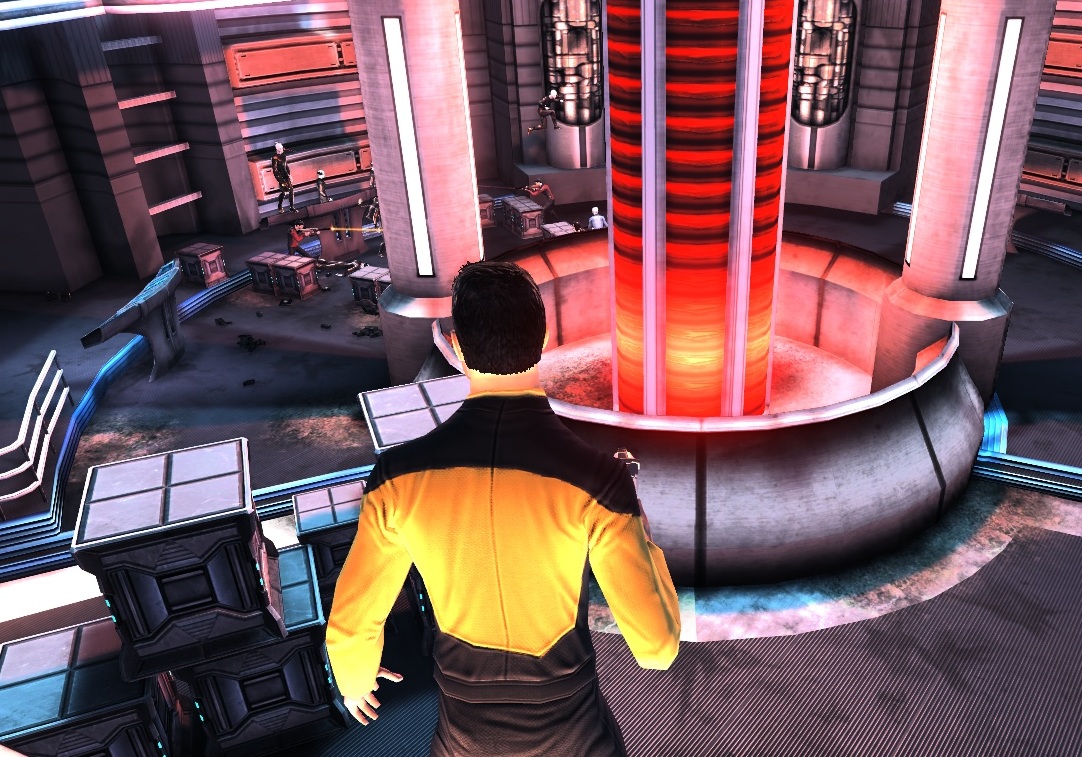 I turn around to go grab one of the guys at the barricade, thinking they can help, but Davis stops me.  “Where are you going?  Get down here now!”  He shouts between phaser shots.  Sighing, I dash to their defense point and try not to shoot the warp core.  Now would be a very bad time for my phaser modifications to backfire. 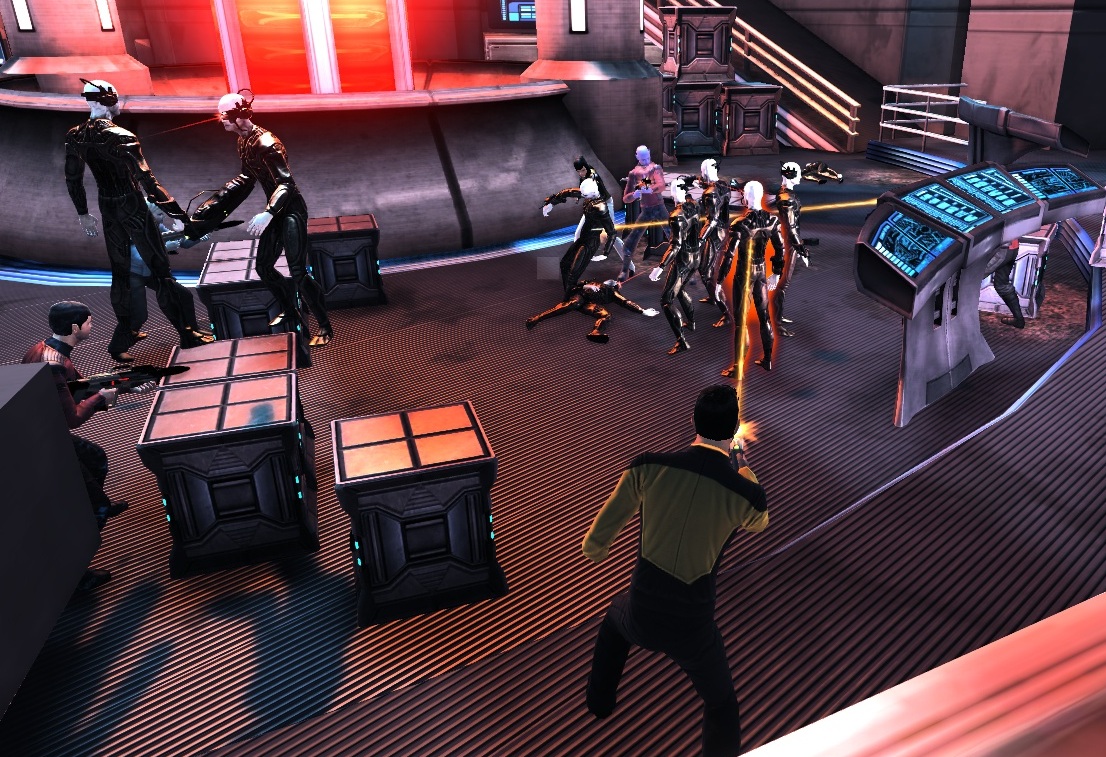 We defeat the invaders, and I head for a computer console to see what needs repairing first.  Commander Davis gets in my way.  “Ensign, I can get the warp core under control.  You should probably head back to your ship.  You can find the transporter room just down that corridor.”

At this point, I start wondering why they won’t let me near anything computer-related.  And why they want me to do all the dangerous work.  Surely nobody on this ship had heard about the incident with the holographic duck, so why would they not want me near their computers?  Besides, the duck thing was just a misunderstanding.

I’m feeling pretty dejected again as I walk to the transporter room.  My captain obviously wants to get rid of me, and this ship’s crew sees me as just some expendable loaner.  I nod at the transporter chief, who beams me back to the Innovation.

The moment I’m on board, one of the crewmen comes up to me. 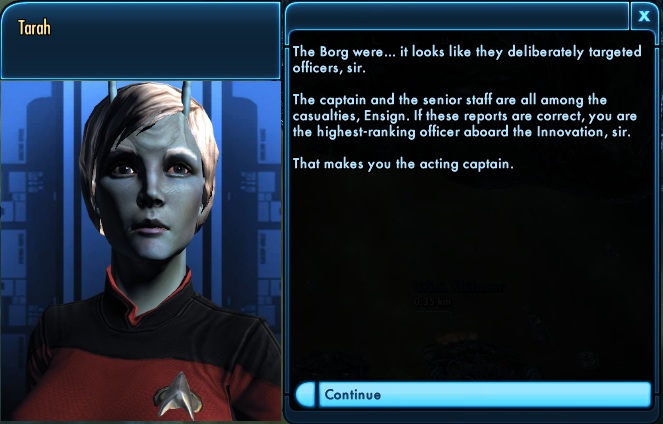 I stare at her  not quite understanding.  Every officer is dead?

And I’m in charge?

I grimace at the crewman.  “We’ve got a problem,” I tell her.