I already wrote briefly about Star Trek Online during its open beta period.  Back then I promised I’d write a Let’s Play series using Star Trek Online; beginning with this post, I am going to attempt to do so.  I’ll post one per week, if all goes well.

The majority of everything I write after this paragraph will be from my character’s point of view; if I have something to say I’ll set it off somehow so you know it’s me, rather than my character.  All of the missions I describe will be real, but my characterizations of various… characters… is usually completely fictional – after all, nobody wants to read a literal account of the game.  So, with no further ado, let’s play 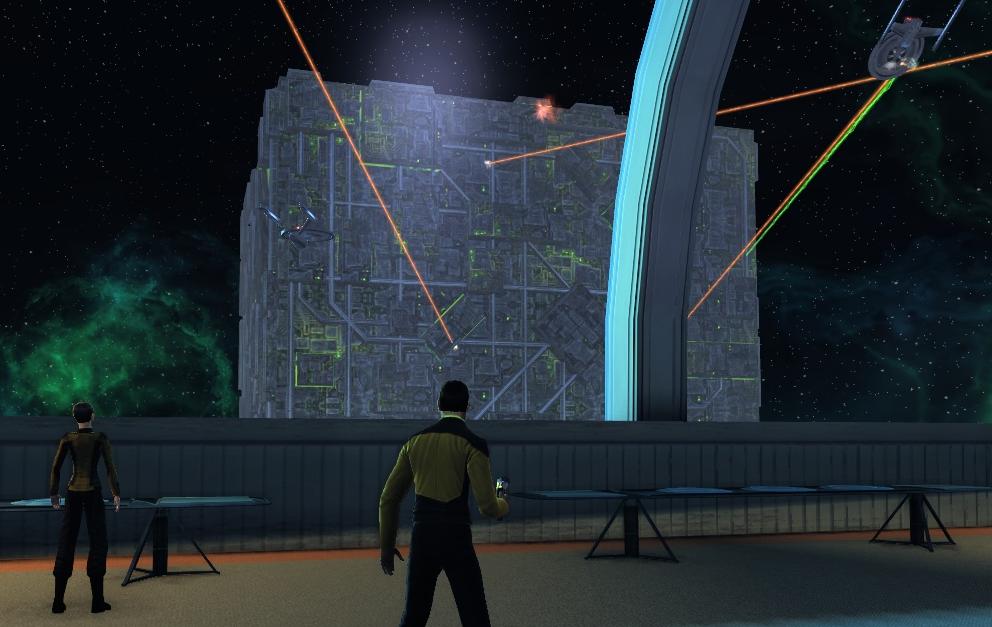 The year is 2409.  The Federation and the Klingon Empire are at war, the Romulan homeworld has been destroyed, the Cardassian sector is in turmoil in the aftermath of the Dominion War, and… oh  yeah.

The Borg are attacking.

I’m Ensign Jason O’Malley, a recent graduate of the Starfleet Academy of Engineering.  Welcome to the mess hall of the U.S.S. Innovation.  I’m off duty, despite the Borg attack, which suits me just fine.  It has given me time to tweak my phaser.  That’s basically how I spend my free time… I’m always fiddling with one thing or another.  Last night I improved the efficiency of the food replicator in my quarters by twenty percent, and there aren’t any really bad side effects.  Unless you ask for banana pancakes.  Please don’t ask my food replicator for banana pancakes.  Or anything made with bananas, really.

But other than that, it’s perfect.  Just like this phaser here – it works perfectly.  I’ve only made minor modifications.  At any rate, it doesn’t matter.  I won’t get a chance to use it.  I’m the most junior officer on board, so it’s not like they’re going to ask me to go on any away missions or anything, and the Borg probably won’t beam on board to attack us.  Why would they?  That cube there is a thousand times the size of our little ship. 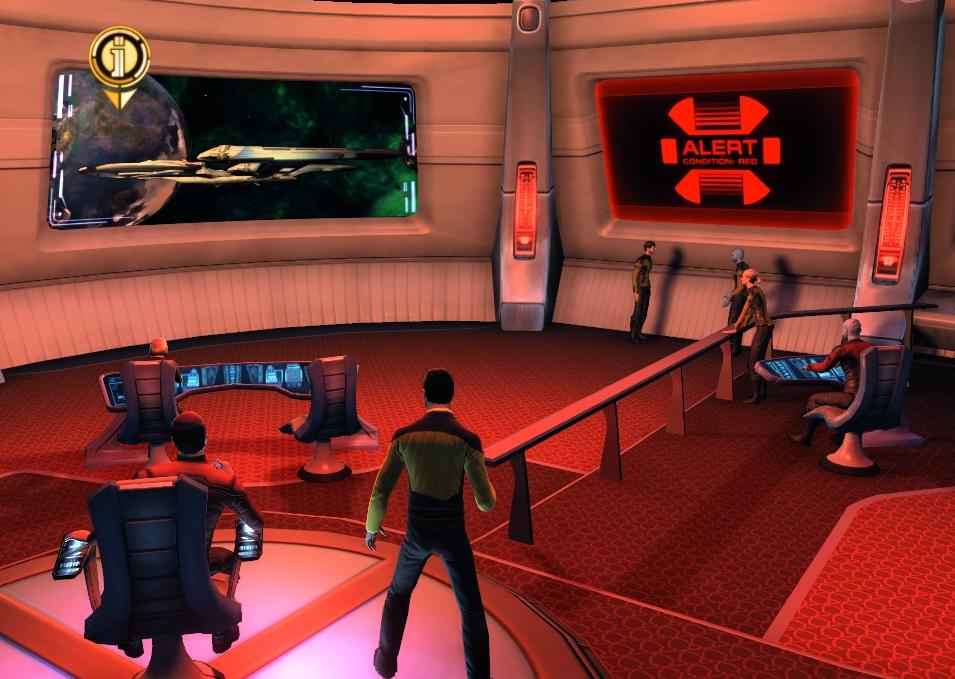 The captain interrupts my musings to summon me to the bridge.  Did I do something wrong?  I take the turbolift and go out onto the bridge for the first time.  There are a half-dozen officers manning the consoles, and a few people standing around the edges of the room chatting.

“Ah, Ensign.  The USS Khitomer is on the main viewer.  I need you to hail them for me.”

“Yes, hail them for me.  Are you feeling alright, Ensign?”

“Yes sir, I just, uh, thought maybe…”  I gesture at all the people milling around the bridge doing virtually nothing.  “Can’t any of these people do it?  I’m supposed to be off-duty, and I was planning to watch this old Earth movie called ‘Tron’ in half an hour -”

The captain cuts me off.  “Ensign, I gave you a direct order!  Now do your job!”  He waves his hand angrily at the console ten feet in front of him.  As soon as my back is turned I roll my eyes, but I do as he asks, pushing the two buttons on the console required to hail the Khitomer. 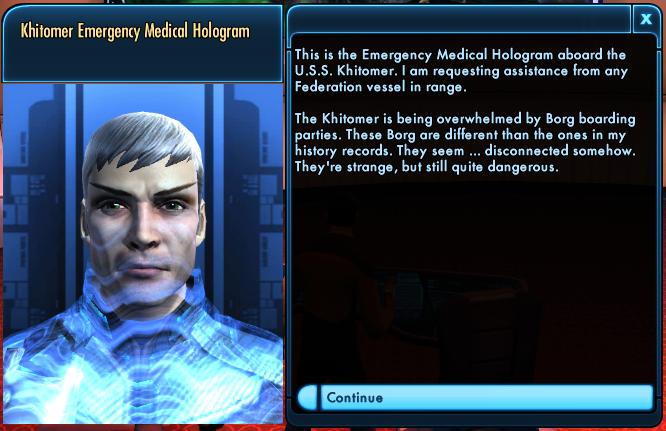 The Khitomer’s Emergency Medical Hologram answers our hail.  “We’ve been boarded by Borg.  I’m requesting aid from all Federation vessels in range.”  The EMH looks expectantly at the captain, who stares blankly at the viewscreen.  The EMH clears his throat.  “Captain?  Can you send someone to help us out?  We need someone to take out Borg drones, and I could use some assistance in sick bay…”

The captain shakes his head as if snapping out of a daydream.  He fumbles for an answer.  “Uh… Yes.  Ensign O’Malley, go to the transporter room and beam over to the Khitomer.  Help out their doctor, then assess the situation and see how you can help.”

My jaw drops to the floor.  “Sir, with all due respect, I’m an engineer, not a field medic.  I’m sure our own medical staff would be happy help, and I probably shouldn’t go beaming into hostile territory alone… ”

“ENSIGN!”  He yells.  “How many times are you going to question me today?  Go!  The security chief will authorize your transport.”

Grumbling under my breath, I stalk toward the turbolift.  Is he seriously sending me over by myself?  Maybe the security chief will have a security detachment for me.  That must be it – this must be a test of my command ability!  With this realization firmly in mind, I pick up my step and whistle a tune as I round the corner into the transporter room. 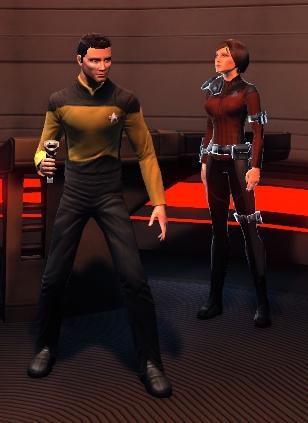 The security chief is leaning against a console, flirting with one of the transporter technicians.  I clear my throat to get her attention.  She gives an exaggerated sigh as I tell her what the captain wants.  “Very well,” she says.  “Step onto the transporter pad.”

“Could I maybe get some backup?  A security team, or at least some field armor?  A phaser rifle?  A medkit?”  She shakes her head at every request, her glare becoming more angry with each question.  Clearly she wants to resume flirting with the transporter chief.  Taking one envious glance at the combat utilities she has strapped all over herself, I walk over to the transporter.

She grumbles “Energize” as soon as I’m on the transporter pad, and has already resumed her flirting as I beam out.

Stay tuned for next week’s episode of Let’s Play Star Trek Online: Aboard the Khitomer (or: The Khitomer A-kills)!